Mike Donald is a UK-based novelist and screenwriter. His current novel, Louisiana Blood, started out as a multiple award-winning screenplay that earned him some great attention in the Hollywood scene. Mike adapted the screenplay into a novel, and Louisiana Blood was published late last year. The novel is an incredible and thrilling mystery involving alternate history (more specifically, an intense conspiracy involving Jack the Ripper never having existed), and it is a thoroughly enjoyable read. I had the pleasure of interviewing Mike about how his novel came to be and his perspective on writing. Enjoy. When did the idea for Louisiana Blood first strike you?

Louisiana Blood was really an amalgamation of ideas. I’d been filming in New Orleans and found the whole place really atmospheric, so subliminally this is where the location came from. I went to quite a famous restaurant there called The Court of Two Sisters, which became Crawdaddy’s in the Novel. I’d also loved the film “There will be Blood”, and “All the Kings Men.” Which gave me more atmosphere, and the governor Huey Long as an important figure who believed in doing whatever it took to get the job done…a big picture man, not bothered by the niceties of sticking to the law.

I was working with a couple of producers at the time and from them I knew that a lot of productions were being set up in Louisiana so that gave me a nudge to that location for more practical reasons. I had recently read a book about one of the main Ripper suspects called Tumblety who fled England to the US and wound up in St Louis…so he became the way of linking Victorian London to modern day Louisiana. With all of these components whirling around like some sort of creative tinder, it only took a creative spark to ignite the fire that would end up being my crazy idea. That being…What if Jack the Ripper never really existed? At which point I imagine it was around 2008.

Once I had the general idea in my head I read as many Jack the Ripper books as I could get my hands on. My idea was to absorb all of the theories and suspects and blend perceived reality with fiction to produce a dramatic story, rather than to try and add to the supposed canon of authors claiming to have discovered the Ripper’s true identity.

How long did the process take to get from idea to novel?

Between 2007/2008 I was working on the research and screenplay. My producers were involved with a large Canadian film fund with access to around $600m in funding. As well as setting up a project with Ferrari to do the life story of Enzo, they were also budgeting $10m and $30m for two of my projects. I had written a supernatural cop film called DEADEYE in conjunction with a Jake West a director friend of mine who produced cult hits like Razorblade Smile and Evil Aliens.

Along with Louisiana Blood I had been commissioned to write a screenplay re-imagining Pumpkinhead as a militarised character to relaunch the franchise for producer Brad Krevoy (Dumb and Dumber.) So things were busier than normal. As happens all too often in the screentrade, the Canadian film fund fell out with our co-producers and this coincided with the 2008 financial crash which hit the fund badly. This left the project in hiatus.

In 2010 I took Louisiana Blood the screenplay to Hollywood via many contests and film festivals. It won or placed in about 20 of them and I got invited to L.A to tout my wares. Despite numerous meetings I couldn’t get anybody to option the script and so it went on the backburner. A few years passed and I decided that Louisiana Blood was too good an idea to for it die on the vine, adapted it into a novel. I’d heard about a new publisher called INKSHARES which was a mix of traditional publishing and crowdfunding. You had to demonstrate public enough interest to convince them it was a worthwhile project and they would publish. It took six months to raise the money and I finished off the manuscript in 2016. I had the cover designed to my spec and submitted the whole package to Inkshares. The novel was published in Dec 2017.

I’m hoping the success of the book will help me back-engineer the book into a film and I’ll get a second chance to get it onto the big screen. The feedback so far is amazing, mainly from female readers which is very satisfying as in my experience women are looking for a more emotional experience from a book than men. I think they are surprised that it isn’t as graphic as the word BLOOD in the title might imply. The phrase Louisiana Blood cropped up in my research as a description of the oil business as it was back in the days of the first oil strikes where money was made and lives were lost. One of the most fascinating images I saw during my research was of Huntington Beach…all along the coast oil derricks soared into the sky giving it a sort of demonic feel and bringing to mind the phrase Satanic Mills. What is it about your characters that inspired you to carry them into a series of stories?

Well, it was part my love of the characters belief their longevity, and part fiscal prudence in wanting them to live on maybe in the small screen arena. Nowadays there is more money spent on Netflix and Amazon than some feature films. The budgets for boxed sets such as Westworld, The Man in the high castle and Game of thrones is huge. Looking forward to the second in the series, Bruges Blood, with Detective Hoog and Katja, I think it’s high time to plunder the ashes of Van der Valk and kick start a Bruges based detective series. When I started writing Bruges Blood I imagined a series of catacombs beneath the police station where Hoog decimates cardboard cutouts on the firing range to the sound track of Dua Lipa’s “Be the one.” No one was more surprised to discover that there really are catacombs beneath the station! The police were very generous in letting me nose around. And on that note VENICE BLOOD is another series I’d like to spin off. I’ve never heard of a Venice based police series and the place is really atmospheric. Controlling the interaction of all the detectives and countries they live in will be a challenge, but that’s all part of the fun.

Are there bits of yourself in your characters?

Mmmm, difficult to say. I think there’s parts of me reflected in Chandler and maybe the technical side of Roxie. But I generally try to remain omnipotent. I suspect that most writers are under the skin, control freaks.

Give us an idea of what your writing process is like.

I generally try to be down at the gym by 04:00, do some cardio till 05:00. Then back for breakfast, before going to the cabin down by the lake where I’ll write until the sun comes up which is when I do a jog round the lake. Then I’ll usually write straight through until I’ve done my 5000 word total for the day…is what I’d like to say! In reality my day is totally unstructured. I usually have around 2 Hrs a day during the week and longer over the weekend, but that is unfocussed time. I’m marketing Louisiana Blood at the moment and itching to continue with Bruges Blood and research Venice Blood. Once I can dedicate a specific time to write I’m pretty fast. When I was writing Pumpkinhead I was on holiday in Scotland and I was told they needed the script done in 2 weeks…I remember sitting down by the loch which was the only place I could get Wi-Fi at the time and sending stuff back and forwards. Once I’d finished I was told that the project was for the Sci-Fi channel…as a result my epic was way over their budget and they ended up doing a story which was pretty much featured an actor in a rubber suit. Like most writers it’s a constant battle to get momentum on a finished project while getting the next one up and running.

You are a screenwriter as well. What is the greatest difference between writing a screenplay and writing a novel? Do you prefer one over the other?

The greatest difference between a script and a novel for me is the amount of description and backstory you can add into a novel. That and the time scales. By that I mean in a script a man pulls up outside a house and we cut to the gun battle or whatever inside. In a book we follow our character as they head to the house, maybe ruminating about what he thinks he’s heading into. Show what the weather’s like, what the traffic’s like, show him checking his weapon, maybe a bit of internal thought on his choice of gun etc…on the one hand this is great because you can really give an atmosphere to the piece…on the other hand you have to write three or four times as many words as a script. Louisiana Blood was way too long as a script, probably around 130 pages, and I had to cut that down to 100 once I started showing it around L.A. This meant I had to lose a whole sub-plot that I was able to reinstate in the novel. Also because I was writing a book I was able to plot in all sorts of clues and characters that were going to interweave through the next two books in the series. But if I’m blunt the most important difference is that if you write a novel and get it published, that process isn’t governed by budget or an actors availability. It’s also a piece of creativity that is more permanent than a screenplay. A screenplay is like a blueprint to build something. It gives birth to a film and it’s the film that lives on through history. The script that begat it is consigned to the vaults and held in awe by nascent writers who read the work of their peers so they can see the nuts and bolts of the master at work.

Who are some of your influences?

From a screen-writers point of view, I’d say Shane Black (Lethal Weapon, Kiss Kiss Bang Bang.) and Christopher Nolan, (The Prestige, Inception.) From an author’s perspective, I’m going through a Jack Reacher phase, also Michael Connelly and his Bosch series on Amazon. Growing up I devoured everything Sci-Fi, and was a big fan of William Gibson, Asimov and Arthur C Clarke. I’m also dipping into some of the more recent novelists that I’ve been introduced to on Inkshares. Sync City published by Pete Ryan, and another one he has in the works Destiny Imperfect, are both great reads in the hard boiled sci-fi genre.

What are some of the projects you’re currently working on?

I always have a selection of screenplays going out to producers and on top of that there’s obviously the Trilogy of novels Louisiana, Bruges, and Venice Blood.

I’d like to thank Mike Donald for the interview. Please visit the links below to explore more of his work or to purchase the incredible “Louisiana Blood”.

To Purchase “Louisiana Blood”: Via Amazon Via Inkshares 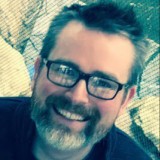