Well, I’m a sucker for new toys, particularly when it comes to my writing craft. Anything that can help me wrangle the herd of cats within my wild imagination is a plus, especially when it comes to story structure. That is why when I came across the trail of Fictionary, I was instantly curious. I got an email with a package deal for another year license for ProWriting Aid, which I recommend to all writers, and with it was a new developmental editing software called Fictionary.

I signed up for a free trial and was blown away by the level of detail the creator and fellow author, Kristina Stanley and her team had created. Fictionary allows you to upload your manuscript from Word or Google Docs directly into their user interface so that you can take a bird’s eye or 30,000ft view of your story and its structure. What I was most amazed by was the simplicity of the surface of the program as well as how deep you could go.

Fictionary breaks your manuscript down for you!

There be a number of bells and whistles under the hood of Fictionary and I don’t profess to know how they work in full, but after inputting my old manuscript for Nemeton: The Trial of Calas, I was instantly presented with a visual element that tracked my story’s narrative arc against that of prototypical or common story lines. This was a super cool feature right off the bat that let me see just how far off my original vision really was. This was helpful in many ways as, I am currently in a revision or rewriting phase with my previously published work.

But, where Fictionary really shines is in the scene by scene evaluation. The Visual components allow you to track the primary story arc as well as different character arcs and subplots across your manuscript, and that can be super helpful if you’ve got multiple arcs.

The three core functions of Fictionary.

Fictionary breaks it down to three key pieces, visualizing your arcs, evaluating your scene by scene story structure, and then exporting the monster once you are done with it. You can make edits on the fly, or edit your work 100% within the Fictionary software, kind of like Scrivener, but with a simpler interface.

When Visualizing your manuscript you can check the full story arc, the amount of words per scene to aid you in nailing down your pacing, and also track how many times characters are showing up on a scene by scene basis. Though these three features seem potentially slight, they are remarkably powerful, not to mention I’ve got it on good authority that soon they will be rolling out even more powerful features.

Evaluating your manuscript scene by scene.

When Evaluating your scene by scene, Fictionary aids you by dialing in your character, plot, and setting down to the real nuts and bolts. Each scene or chapter has an interface to the right that highlights a number of tabs under which there are a list of critical questions that you should have asked in your first draft, but most likely didn’t if you are anything like me. Beyond the questions, each field is complimented by an infographic tip that educates you on the precise reason for each question or field. This is where the real power of the Fictionary software resides.

The Character tab features a range of questions like what character appear in the scene, who has the POV, what are the internal and external goals, what are the stakes and consequences, and the impact on the protagonist as well as other characters. The list goes on including an entire array of illuminating questions that, at least I often forget to include in my first draft. Plot, setting, and additional notes further aid you in dialing in your edit.

Fictionary, is it the next big thing?

I can’t speak to that yet, as Fictionary is a relatively new tool and I know that many writers are super comfortable with Scrivener. But overall, I think the interface is much more user-friendly. The primary draw is for writers who have already finished a rough or first draft of their work and want to import that manuscript in order to take it to the next level. I found the detailed list of questions and fields aided me in further cementing my story’s structure, theme and message.

Fictionary offers a free trial so that you can take it for a test drive, but I personally recommend that after you do so you take the dive. A year-long license won’t break the bank and I know that they are working hard at rolling out some key features like multiple manuscripts and an autosave feature to prevent losing precious progress. Overall I think Fictionary is a killer tool for novel based writers to explore.

Writing Bloc has your back!

We have partnered with Fictionary to provide all of our members with a killer discount on your first three months or on your first yearly license!

Fictionary is offering Writing Bloc writers and readers a 50% discount on the first three months ($10 per month, regularly $20 per month) or 50% off Annual subscription ( $100 per year, regularly $200 per year)

Half off ain’t half bad, is it? 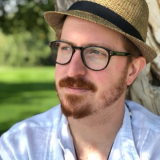 Christopher Lee is the author of Nemeton: The Trial of Calas, Westward, Bard Song, and Pantheon. Christopher Lee is an independent, self-published author, copywriter, ghostwriter, and wordsmith extraordinaire... ok maybe just a wordsmith...

Christopher is an avid history buff, mythologist, bardic poet, and keeper of the old ways.